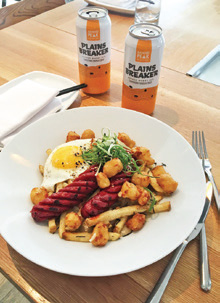 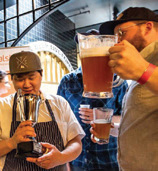 Every year the Gravy Bowl event kicks off Poutine Week and this year it took place at Last Best Brewery. Nine teams made up of a chef, a Calgary Stampeder and a local brewery created their very special poutine for a panel of judges. They and lots of other restaurants sell their special poutines throughout the week to sell the most poutines for Mealshare.

This year’s Gravy Bowl saw a lot of good poutines, and the judges had so much fun tasting them and sipping on the matching beer! This year’s winner was chef/owner Roy Oh of Anju Restaurant with Stampeder Quinn Smith and Banded Peak Brewery with their Pocha Poutine that consisted of gochujang wagyu hot dogs, beer-battered cheese curds, fried egg, oxtail beer gravy, nori (edible seaweed), green onions and kennebec fries. Visit poutinewithpurpose.com/gravybowl for more information.

After a heated competition held at SAIT on May 5, Hawksworth Young Chef Scholarship names Trevor Jerram of Trinity Restaurant in London, England – with his Sablefish Bourguignon – and Michael Ellis of Calgary Winter Club – with his Sablefish Duo – as the Calgary finalists. The two young talents will represent Calgary at the National Finals in October, where they compete alongside six other chefs from across the country for the Scholarship’s $10,000 grand prize and title as Canada’s Top Young Chef. As founder David Hawksworth said, “Each of the chefs showcased incredible talent, well beyond their years, and from what we saw and tasted from the two winners, this is certain to be a tight race to the grand prize.” (As long as the chef is a Canadian citizen or permanent resident, he/she can compete in the competition. Jerram is a Calgarian currently working in England.) 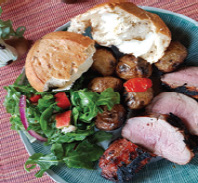 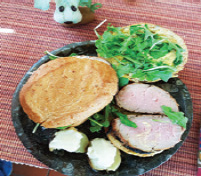 An especially tasty dinner thanks to Lina’s Italian Market. The fresh, local pork tenderloin is always a good size and we marinate it overnight in grainy mustard, Aperol, lime juice and a touch of maple syrup, then on the grill it goes for about 10 minutes a side until an instant-read thermometer inserted into the thick part reads about 155°F. Still pink inside and moist and tender, we love it. Then leftovers become sandwiches using rolls from Lazy Loaf & Kettle, because they’re made from the same recipe as the Kettle bread, their signature bread, one of the best breads in the world.

Found at Co-op stores is Inglehoffer’s Applewood Smoked Bacon Mustard – you have never tasted a mustard this tasty! You almost eat it out of the container all by itself, but it does wonderful things for sausages, meats, whatever you like your mustard on. Bacon makes everything better! 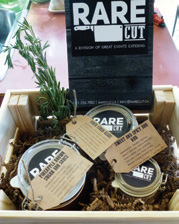 Rare Cut is the newest division of Great Events Group offering barbecue catering, Stampede catering and mobile grilling. Look for Bad Ass Brisket, slow-smoked brisket, Smothered Meats, such as pulled pork or beef, and a choice of Rare Cut sauces, Smokehouse Ribs, slow smoked baby backs and much more, including salmon, chicken and vegetarian, and all the sides and salads you’d want to go with barbecue, like coleslaw and corn bread and Campfire Beans. “Being a barbecue person who smokes meat, I can say that this would be great food for whatever event you have in mind,” says City Palate’s Kathy Richardier. Check it out at greateventsgroup.com and rarecut.ca.

Learn how to make great simple recipes by tuning into the Food Network channel and watching some of the country’s great chefs – Lynn Crawford, Mark McEwan, Roger Mooking and Michael Smith, for example – cooking their favourite recipes and sharing must-know tips. Visit foodnetwork.ca/shows/food-network-canada-chef-school for all the tasty details. 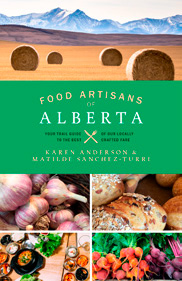 Don’t miss this one from our local food people, Karen Anderson and Tilly Sanchez-Turri – Food Artisans of Alberta (TouchWood Editions, paper cover, $25). Look for it at Chapters and The Cookbook Co. After driving Alberta from Peace Country in the north to the International Peace Park near Waterton in the south – and everywhere in between – they can tell you there’s a lot of ground to cover. They’ve divided the province into six sections, very similar to what their colleagues in tourism do, so that you can use this book as a companion to their publications to plan your food travel. Each area – Northern, Edmonton, Central, Calgary, the Rockies and Southern Alberta – has unique flavours for you to discover. 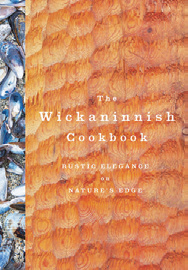 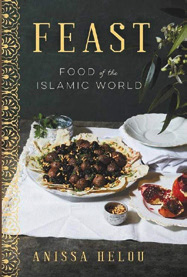 Oh, man, amazing flavours in this one that’s a richly colourful and exceptionally varied cookbook of timeless recipes called FEAST Food of the Islamic World by Anissa Helou, a chef, food writer and journalist focusing on the cuisines and culinary heritage of the Middle East, the Mediterranean and North Africa. Yotam Ottolenghi, a cookbook author we’re familiar with, says: “Her range of  knowledge and unparalleled authority make her just the kind of cook you want by your side.” (Harper Collins, hardcover, $75)