Mention truffles and most people think of fancy chocolate treats. But the truffle belonging to the fungi family, whether found in the wild or in a cultivated forest, is even more valuable. Found by whom? Nowadays, mainly by canines.

A few pot-bellied pigs have been trained to hunt and are restrained enough not to devour their finds, one being Annabelle at Below theNut Farm on Vancouver Island, who prefers dried chick peas to the fungi as her reward. For the most part, though, dogs are preferred to harvest truffles, both in the wild and on truffle farms or truffières. Dogs are not only easier to transport, but more discreet than a pig to take for a walk in a forest. Secrecy is important in protecting this valuable commodity to prevent “rakers” from trespassing and indiscriminately harvesting a patch. Rakers tend to blend in unripe, poor quality truffles (which are lower priced) and disturb the fungi’s ecological habitat.

So how does one go about training a dog to hunt for the elusive prize? Like gourmands, these dogs are motivated by food: find a truffle, get a treat. While the Italian Lagotto Romagnolo breed is the standard for the job due to its highly developed nose, almost any dog can be trained to hunt truffles. I attended the Oregon Truffle Festival (OTF) in Eugene, Oregon in January to witness breeds from poodles to pointers, labs, shepherds, a Boston terrier and even a hound dog being put through the drills. There, I got the run-down from dog trainers Bob and Deb Walker of K9-Behavior Company in Wilbur, Oregon, OTF founders Leslie Scott and Dr. Charles Lefevre, and trainers Kristin Lipzieg and Jim Sanford.

The OTF was launched in 2006, with the goal of increasing the quality and value of local truffles to compete with European imports by being ground zero for dog training. It has increased in scope to celebrate all things truffle, attracting everyone from mycologists (scientists who study fungi) to farmers to foodies. The OTF hosts the Joriad (North American truffle dog championship) as well as a two-day dog training session. HOW TO TRAIN A TRUFFLE DOG The younger a dog starts, the better, but if the trainer follows the proper steps, he or she can train a dog of any age. The critical underlying skill for both dog and trainer is establishing a marker. A consistent connection must be made between the dog performing a desired activity and positive reinforcement from the trainer – immediate acknowledgement with a verbal “yes” or an auditory signal from a hand-held clicker, followed by a treat. If there’s any lapse of time, training is unlikely to be successful, because the dog will not understand exactly what he is being rewarded for. No distracting petting or belly rubs are allowed – only the treat!

With truffles as the goal, the first step is to imprint and enforce the truffle scent by repeatedly bringing a truffle-oil-soaked cotton ball to the dog’s nose. The second step is to teach the dog to keep its nose down, the opposite of usual dog-training practice, where sniffing everything en route is discouraged.

From these basics, training involves increasingly difficult searches for a target (a tiny piece oftruffle in a plastic capsule). At first, the scent is hidden from the dog’s direct line of vision. The next step is to cover the scent so that the dog must find something that’s not visible, and the last is to bury the scent, requiring the dog to dig for it.

The second phase of training moves the team of dog and owner outside into the woods, still using targets. The final step requires a location where the existence of live truffles is pretty much guaranteed. All the practice is put into action with fingers crossed that the fourlegged student is more interested in hunting for culinary gold than for a squirrel.

The OTF founders and trainers, are passionate about the opportunities and economic feasibility of the truffle business. Patience is required, as a planted tree cannot be expected to produce for seven to eight years, but people I met were excited, investing money to buy suitable land in California to British Columbia to build their truffière and of course, train their dogs.

Truffle hunting has a long history. In medieval times, truffles were a poor-man’s food, used to elevate the flavour of basic meals. Peasants in Europe tending the land for aristocrats first discovered these aromatic black nuggets when their sows would go wild when they found one. The truffle, you see, releases the same pheromone found in boar saliva . Landowners soon caught on and took the truffles for their own feasts. As demand increased and truffle hunting became a sport, aristocrats used the pig’s penchant for the fungi to root out the truffles, with the prize going to the owner of the swiftest swine to produce a prized nugget.

GETTING TO THE OREGON TRUFFLE FESTIVAL
The next Truffle Festival takes place on three weekends between Jan. 23 and February 16, 2020; check the web site oregontrufflefestival.org for details. WestJet offers a daily direct flight from Calgary to Portland. 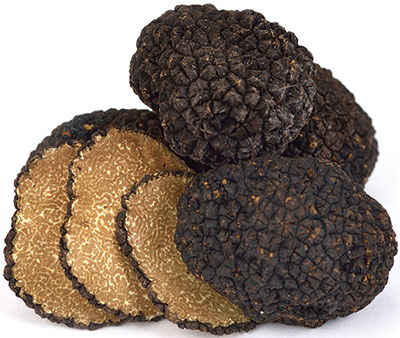 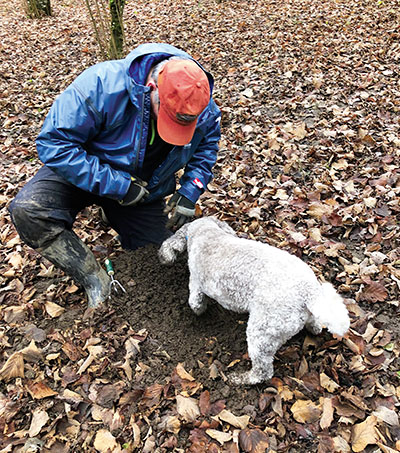 BJ is a career traveller but is considering settling down with a dog and farming truffles.

About the Author: BJ Oudman