Masala is a tough thing to write about if you haven’t grown up with someone cooking it for you, or had the opportunity to submerge yourself in south Asian cuisine, learning the intricacies of a masala as a foundation for everything from curries to tea. Masala isn’t one single ingredient, but a layered combination of ingredients; it refers to a spice mixture and could be a dry spice blend – cumin, coriander, chile powder and turmeric are common – or a moist combination of onions, garlic, ginger and chiles that, together, often with dry spices as well, build the base for a flavourful curry. There might be cardamom pods or mustard seed, warm spices like cinnamon, allspice and clove, amchoor (dried green mango powder) or asafoetida, the dried resin of a rhizome that boosts umami and has a flavour reminiscent of leeks. Most south Asian home cooks have a masala dabba in their kitchen – a round metal container with smaller containers inside holding whole and ground dry spices, like a painter’s palette. 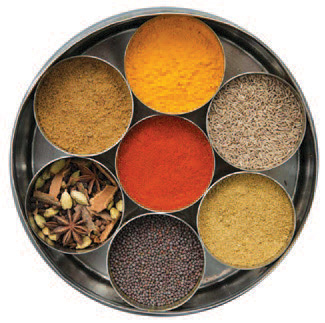 Masalas are fiercely regional, each spice blend reflective of the terroir, influencing the complex flavours of dishes in each area. I deferred to Alberta Food Tours’
president and Indian cooking expert Karen Anderson, who travels to India often and knows the cuisine well. She has become fluent enough to co-author A Spicy Touch – Family Favourites from Noorbanu Nimji’s Kitchen, the fourth self-published (and best-selling) cookbook of her long-time friend and mentor.

“Muslim cooks on Kerala’s Malabar coast use mainly chile powder, turmeric and salt in their cooking,” says Anderson, who recently launched facesplacesandplates.com with photographer Pauli-Ann Carriere, to document their extensive culinary road trips through south India over the past few years. “With all the seafood on Kerala’s coast, cooks also add ground coriander because they like its hint of lemon. Pepper is the signature finishing note here because this is where it grows – along with cardamom – in the Cardamom Hills. In neighbouring Tamilnadu, we saw lots of fennel and asafoetida. In the north there’s a lot more cumin. Saffron grows in Kashmir. Turmeric is ubiquitous and pan-Indian. Chiles are tiny and hot in the south. Cinnamon and cloves give warmth to garam masalas.

Fortunately we have access to great ingredients here in Calgary, so you’re well equipped
if you want to start your next dinner – or breakfast, or dessert – with a masala.

If you know someone who roasts and grinds their own garam masala, make friends with them. (Or learn to make your own.) Garam masala is a warm spice blend, more cinnamon-heavy than curry powder. This is Noorbanu Nimji’s version, from A Spicy Touch by Nimji and Karen Anderson. “Broken cinnamon sticks will be fine, but it’s usually cassia from Vietnam which is strong like cinnamon hearts and cinnamon buns,” says Anderson. “Sri Lankan cinnamon is just a warm tone and amalgamator in the background. You can use regular cinnamon sticks – your masala won’t be as subtle, but it’ll still be tasty.”

Preheat the oven to 300°F. Place the cinnamon, cardamom, black peppercorns and cloves on a baking sheet and roast for 10 minutes. Let them cool to room
temperature, then place them in a spice grinder along with the nutmeg and grind to a fine powder. Store in an airtight container in a dark place. 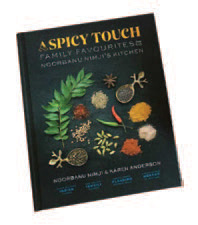 This go-to chicken curry comes from the family of Vancouver restaurateur Vikram Vij. Add the spices in the order specified when building your masala base. Adapted from Vij’s Elegant & Inspired Indian Cuisine by Vikram Vij & Meeru Dhalwala.

Set a large, heavy skillet or braising dish over medium-high heat and add the oil; heat for a minute or two before adding the onions and cinnamon stick; sauté for about 4 minutes. Add the garlic, ginger, tomatoes, salt, pepper, cumin, coriander, garam masala, turmeric and cayenne. Cook the masala for 5 minutes, or until the oil separates from the masala.
Remove and discard the chicken skin and add the bone-in thighs to the masala. Stir to coat them well and cook for 10 minutes, until the chicken looks cooked on the outside. Add the sour cream and 1 c. water and stir well. Bring the curry to a simmer, reduce the heat to medium, cover and cook for 15 minutes, stirring once or twice, until the chicken is cooked through. Remove the cinnamon stick and cool the curry for at least half an hour.
When the chicken is cool enough to handle, peel the meat off the bones, discard the bones and stir the chicken back into the curry. Refrigerate or reheat right away, stirring in the cilantro just before serving. Serves 6. 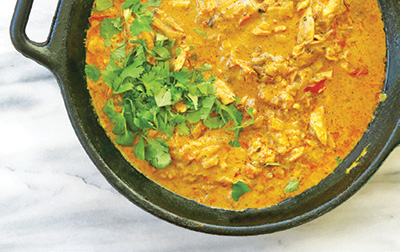 Calcutta Cricket Club on 17th Avenue has started serving brunch; on the menu, a Bengali masala-spiced granola is heavy on the cinnamon, cardamom and clove.
Chef Rene’s Bengali Masala Granola. This granola dish is super versatile – you can eat it alone as a snack, sprinkled on pancakes, or serve it with yogurt and fruit like they do for brunch at Calcutta Cricket Club.

Preheat the oven to 275°F. Mix all dry ingredients in a large bowl. In a separate bowl, whip the canola oil and maple syrup until a thick consistency is achieved. Pour over the dry ingredients and mix well. Spread the mixture onto a sheet pan and bake for about 30 minutes, stirring every 10 minutes so the edges don’t burn. Let cool and serve with fruits and yogurt. Makes about 4 c.

Garam masalas vary from region to region in India, and often have a ton of different spices. The classic Bengali version is super simple, with only three main ingredients: cinnamon, cardamom, and clove. Sometimes they add bay leaf as well, but this is the most common. They showcase it at Calcutta Cricket Club in a couple of dishes – the paneer and honey and the roasted carrot and peas. They also use it extensively to finish curries, adding it during the last 5-10 minutes of cooking.

Lightly dry roast whole spices in a pan, being careful not to burn them. Cool and pulse to a fine powder in a spice grinder. Store in a sealed container. 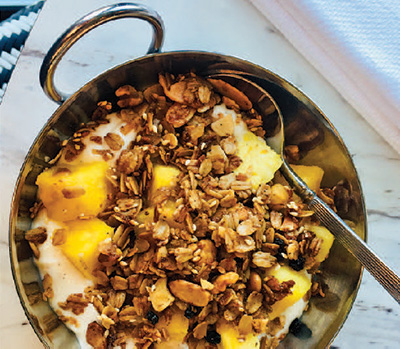 Kanelbullar are twisted cinnamon buns of Scandinavian descent; they’re most commonly flavoured with cardamom, the key ingredient in Indian chai – a tea made with milk, sugar and cardamom – and in chai-inspired spice blends.
Dough:

Put the milk into a large bowl and sprinkle the yeast overtop. Let stand for 5 minutes, until it’s foamy. Add 3 c. of the flour along with the butter, sugar, egg, cardamom and vanilla. Stir until the dough comes together, and continue to knead, or mix with the dough hook attachment of your stand mixer, until the dough is smooth and elastic, adding more flour as needed (you’ll likely need 3-1/2 cups). It should be tacky, but not sticky – add more flour if it’s sticking to your hands. It will smooth out and become less tacky as it sits. Shape into a ball and place it back in the bowl, cover with a tea towel and let stand in a warm place until the dough has doubled in bulk, 1-1/2 to 2 hours.

Cut the dough into two pieces and on a lightly floured surface, roll each piece into a rectangle that’s about 9×12 inches. In a small bowl, stir together the soft butter, brown sugar and chai spices, and spread half over each piece of rolled-out dough. Fold each piece up into equal thirds, as if you were folding a letter, and roll it again until it’s roughly 8×14 inches.

Cut the dough lengthwise into strips about 1 inch wide. Twist each strip by holding each end and twisting in opposite directions, then holding one end, wrap it around two or three of your fingers (as if you were wrapping up an electrical cord), then tuck the end over, under and through the hole in the middle. (Google for some great video tutorials.)

Place each rolled bun on a parchment-lined sheet, brush with beaten egg and sprinkle with pearl sugar or sliced almonds, and let them sit while you preheat the oven to 350°F. Bake the buns for 15-20 minutes, until golden.
Makes about 1-1/2 dozen kanelbullar. 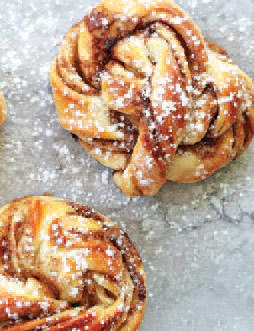