Calgary loves its beer, but it isn’t much of a cider city—we explode with craft breweries, but Calgary’s Uncommon Cider Co. stands alone as Alberta’s first locally owned and operated craft cidery. Uncommon has been making interesting, complex ciders out of B.C. apples and rescued fruit from urban back yards since 2016. Earthy and floral, the ciders’ flavour profiles are as elaborate as those of wine. Other breweries, like Village, are jumping on the popularity of alcoholic cider and making their own, in part to provide a gluten-free option for visitors to their tasting rooms. Cider’s popularity is growing, but although people are ordering it more often as a beverage, it’s a little slower to catch on as an ingredient.

Beer, wine and spirits have been used in the kitchen for as long as they’ve been brewed and fermented, yet cider is often overlooked. Sweeter than both beer and wine, it’s not strong enough to overpower a dish, and has a punchy acidity that makes it a perfect marinade, cooking medium for rich braised meats like lamb and pork shoulder, cooking liquid in a pot of real baked beans, or base for gooey, buttery cheese fondue. Try simmering it in a saucepan—with herbs, spices, ginger, citrus or other aromatics, if you like—to reduce it to a sticky syrup or glaze for baked ham, grilled ribs or fatty fish like salmon or steelhead trout, or to make a wonderfully complex almost-caramel for drizzling over ice cream, cake, fritters or other desserts.

Make a quick gravy by pouring cider into a hot pan after browning sausages, using it to scrape up any browned bits, and spoon the sweet and savoury sauce over the sausages and any mashed potatoes you happen to have on the plate. If you’re a fan of winter squash soup, swap a cup or so of apple cider for the stock in any recipe. (And if you have any of that cider reduction left, swirl it on top with a spoonful of crème fraîche.)

If you’re not into the boozy version, regular unfiltered, unfermented apple cider can be used in any of these recipes – and coming up with a drink pairing for your dinner should be a no-brainer.

Dry white wine is traditional for cheese fondue and a non-hoppy beer is a tasty alternative, but cider adds a wonderful sweetness that pairs well with nutty Swiss cheeses like Emmenthal and Gruyère.

If you like, rub the inside of a fondue pot with the cut garlic clove. Toss the grated cheese with the cornstarch. In a heavy-bottomed saucepan, bring the cider to a bare simmer. Start whisking in the cheese in small amounts, adding more as each batch melts. Stir until the mixture is smooth, then place the fondue pot over the burner; pour in the cheese mixture and keep warm. Serve with cubed bread and veggies.
Serves 6-8. 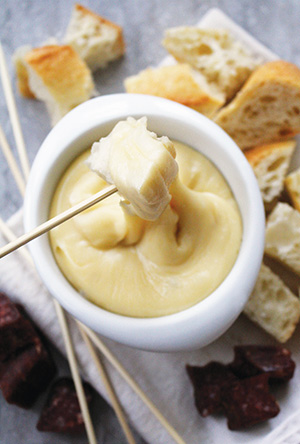 Sweet cider and fatty salmon are an unlikely but delicious combination, and can be pulled together with little effort.

Heat the apple cider in a small saucepan set over medium-high heat and simmer until it’s reduced to about ¼ cup, and has the consistency of runny syrup. Meanwhile, preheat the oven to 400°F. Put the salmon or trout skin side down on a parchment-lined baking sheet, drizzle with olive oil, sprinkle with salt and  pepper, and pull the leaves of a few sprigs of thyme to sprinkle over top. Roast for 15–20 minutes, until the fat rises to the surface and the thin end flakes with a fork, but the fish is still moist in the middle. Serve drizzled with the cider.
Serves 4. 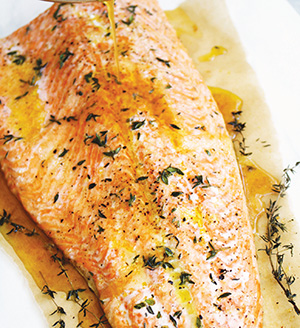 A pot of true baked beans is divine – and the sweetness and acidity of cider is perfectly suited to its long-simmered sauce.

In a bowl or medium pot, cover the beans with enough water to cover by a couple of inches and let soak for several hours, or overnight. Put the beans into a medium pot (if they aren’t in one already), add enough water to cover by a couple of inches and bring to a simmer; cook for 30-45 minutes, or until the beans are just tender. (If they don’t soften, add a pinch of baking soda to the cooking water.) Drain, transfer to a braising dish or Dutch oven, and add the cider, onion, garlic, ketchup, brown sugar, molasses, mustard, balsamic, Worcestershire, salt and pepper. Bake, uncovered, for 2-3 hours, adding more water if the mixture seems dry, until the beans are tender and the sauce is thick and sticky around the edges.
Serves 8-10. 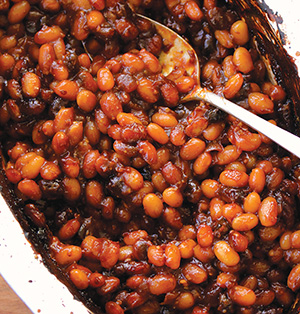 Apple fritters are surprisingly easy to make at home—and there’s no need for a special doughnut cutter. Sautéing the apples first ensures that they cook through; keep the dough pieces small, as they’ll puff slightly as they cook.

Put the cider into a large bowl and sprinkle with yeast. Let stand for 5-7 minutes, until foamy. Add the flour, butter, egg, sugar and salt, and stir until the dough comes together. Continue to knead, or mix with the dough hook attachment of a stand mixer, until the dough is smooth and elastic, and slightly tacky. Cover and let stand for a couple of hours.

Meanwhile, heat a drizzle of oil in a skillet set over medium-high heat and sauté the apple for 3-5 minutes, until softened and turning golden. Add the brown sugar and a sprinkle of cinnamon and cook for another minute or two.

Roll or pat the dough out into a 10-inch square and using a knife or pastry cutter, cut into 4 strips in each direction, making 16 squares. Place a spoonful of  apples on each, sprinkle with a bit of flour (which will make them less slippery) and gather up in a bundle, pinching to seal. Flatten them with your hand to make rough patties about half an inch thick—don’t worry if they look messy, the more craggy they are the better. Place on a sheet, cover with a tea towel and let rise for another half hour or so.

When you’re ready to cook, heat about 2 inches of oil in a shallow pot until hot but not smoking—a thermometer should read about 350˚F. Cook the fritters in batches, cooking for 1-2 minutes per side, or until deep golden. Transfer with a slotted spoon to a paper towel-lined sheet.

Whisk together the icing sugar and cider and drizzle over the fritters while they’re still warm. Makes about 1-1/2 dozen fritters. 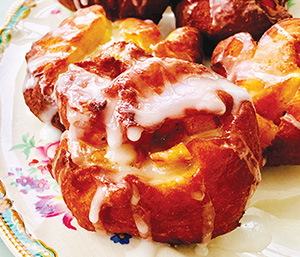 A tasty condiment to stash away in your fridge to serve with roast chicken or pork, to spread on grilled cheese or hot dogs, or to add to a cheese and charcuterie board.

In a medium saucepan or heavy skillet, heat a drizzle of oil over medium-high heat. Add the onions and cook, stirring occasionally, for about 20 minutes, until turning golden. Add the garlic, cider, thyme, brown sugar and balsamic and bring to a simmer. Cook, stirring often, until thick, golden and jam-like.
Makes about 1 cup. 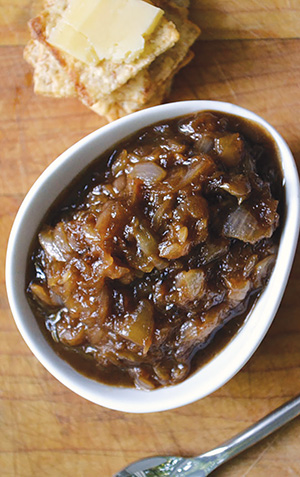