As Albertans, we should all be doing our civic duty by eating more barley.

The Canadian barley industry produces about eight million tonnes a year, over half of which grows right here. We drink a lot of it—the prairies produce some of the world’s best malted barley, which is used to make beer—and about three-quarters of the annual crop is used as livestock feed, in turn fuelling the multibillion dollar Alberta beef industry. Barley as an ingredient in itself barely registers, and yet it’s one of the most inexpensive, fibre-rich and nutrient-dense grains available. It’s easy to cook, requiring about the same amount of time on the stove as brown rice, and also comes in convenient flour and flake form. And yet most of us rarely think beyond a bowl of beef and barley soup. (Not that there’s anything wrong with that.)

There are plenty of reasons to get to know barley better, besides the fact that it’s one of our largest cereal crops: fibre is good for you, and barley contains about four times as much of it as oats. And while the two are similar, people aren’t quite as comfortable with barley, although you can buy porridges that contain barley
flakes, which cook (and taste) just like oat flakes, and you can boost fibre by adding barley flour to your baking, as you might with oat flour. And of course there’s the option of cooking the grains on their own—something we’re less likely to do with steelcut oats.

When perusing barley options on store shelves, you’ll come across “pearl and pot” barley, the difference being the amount of the grain’s exterior that has been buffed off. Both have been put through a pearling machine, which removes the inedible hull and polishes the kernel. Pot barley has been pearled for a shorter amount of time and still has most of the barley bran intact. Pearl barley gets some extra time in the machine, which removes most of the bran layer. Both are great for you, and can generally be used interchangeably in recipes, but you may find pearled barley slightly softer.

Like most whole grains, barley can be cooked and served as a side dish or pilaf or as the base for grainy salads, added to soup or served for breakfast, or simmered in a pudding for dessert. It’s ridiculously versatile, and gets on well with a huge range of ingredients and flavours. Barley cooks in about 40 minutes, and if you like making things ahead of time, a large batch can be cooked and stashed in the fridge for several days or frozen to toss directly into your pot of soup. Cooked barley can take the place of steel-cut oats for a chewy, nutty, substantial breakfast, and if you’re looking for a new way of boosting the fibre in your pancakes, waffles or baked goods, try subbing barley flour, which is available by the bag alongside the wheat flour in most grocery stores, for a portion of the all-purpose flour in your recipes. (Yes, barley contains gluten.) But don’t feel pressured to come up with creative new uses for it—it’s completely valid to keep a jar on the shelf just for beef and barley soup.

This sausage, lentil and barley soup was dubbed “spock soup” when I fed it to Leonard Nimoy during his visit nearly a decade ago — he requested beef and barley, but I thought this would be more interesting, and showcase our Spolumbo’s sausages and prairie lentils at the same time. He loved it.

In a medium pot or Dutch oven, heat a drizzle of oil over medium-high heat. Squeeze the sausage out of its casings into the pot and cook, breaking up with a spoon, until no longer pink. Chop the entire bunch of celery starting at the leafy end and going about halfway down — I use a lot of celery — and throw it in the pot. Cook for about 5 minutes. Add the stock, lentils and barley, turn the heat down to low and simmer for about 45 minutes, until the lentils and barley are tender. Adjust seasoning and serve hot.
Serves 4.

Barley makes a delicious base for risotto, which is not quite as creamy, and more substantial than the traditional short grain rice variety. Feel free to play around with it, adding whatever ingredients are in season or suit your taste

Heat the oil in a large saucepan set over medium-high heat; add the onion, garlic, lemon zest, and pepper, and sauté until the onion is softened, about 3 minutes. Stir in barley and stock and bring to a simmer. Reduce heat; cover pan and simmer for 45 minutes, stirring vigorously halfway
through for 15 seconds. Stir in shrimp and peas; cover pan and simmer until shrimp are pink and peas are tender, about 5 minutes. Sprinkle with parsley or mint and serve. 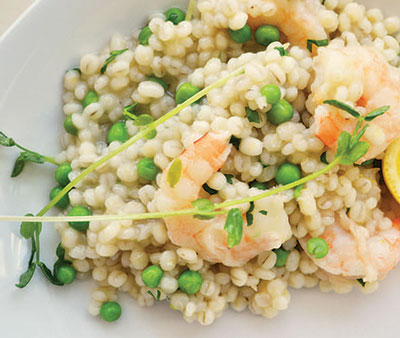 This dish makes great use of leftover roasted vegetables, or you could start by roasting them: dice squash, sweet potatoes, cauliflower, Brussels sprouts or any other roastable vegetable into similarly-sized pieces, toss with oil and roast at 425˚F for 20-30 minutes, or until just tender.

Preheat the oven to 350˚F. Spread the roasted vegetables in a shallow baking dish and top with the barley. In a medium bowl, whisk together the eggs, half & half and the salt and pepper. Stir in about 3/4 of the cheese and pour over the vegetables and barley. Sprinkle with remaining cheese and bake for 30 minutes, or until set and golden.
Serves 6. 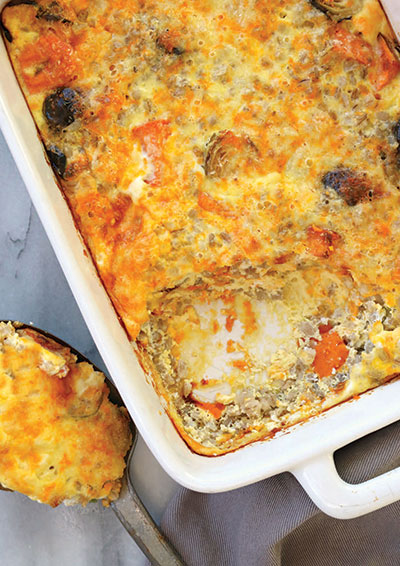 Who doesn’t love rice pudding? This version is more substantial, with a grainier, nuttier texture.

Preheat the oven to 350˚F. Combine the barley and raisins or currants in a 2 quart baking dish or individual baking dishes. Whisk together the eggs, sugar, cream
and salt; pour over the barley and bake for 30 minutes, or until set and pale golden on top. Serve warm or chilled, dusted with cinnamon. 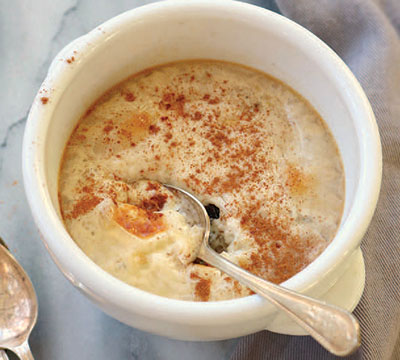 Barley flour is generally available in the
baking aisle of most grocery stores
alongside other flours—it can be used in
place of other whole grain flours, but is
particularly high in fibre, so I like to cut
it with regular flour. I’ve been known to
make these using a leftover cold latte
(chai latte is particularly delicious) and
even eggnog.

Preheat the oven to 425˚F. In a large bowl combine the flour, sugar, baking powder and salt. Add the butter and blend with a pastry blender or fork until well combined, with some pieces of butter the size of a pea. (Alternatively, blitz the dry ingredients and butter in the bowl of a food processor.)

Add the milk and stir until the dough comes together. Gather it into a ball and place on a parchment-lined sheet; pat into a circle an inch thick. Cut into 8  edges with a knife and pull them apart, spacing them an inch or two from each other. If you like, brush with extra milk or cream and sprinkle with coarse sugar.

Bake for 15-20 minutes, until deep golden. Meanwhile, in a small bowl, whisk together the icing sugar and milk. Drizzle over the scones after they’ve cooled
slightly. 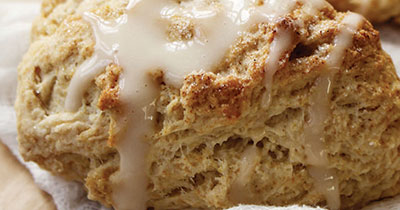 Old-fashioned oats are traditionally used in granola, but barley flakes deliver a higher dose of fibre; feel free to use a combination of the two.

Preheat oven to 300°F. In a large bowl, stir everything together except the dried fruit. Spread the mixture on a large parchmentlined rimmed baking sheet and bake for 30-40 minutes, stirring occasionally, until the mixture is golden. Remove from the oven and stir in the dried fruit. Cool completely before storing
in airtight containers.