There are a few cooking techniques that are so fundamental and useful, everyone should be comfortable with them. Braising is one of the most basic and versatile cooking methods—one that requires very little effort, not much in the way of technique, and allows liquid and the heat of the oven (or stovetop) to do all the work.

Braising is essentially what you do when you use a slow cooker— it’s a low, slow cooking method that utilizes liquid both as a heat conduit and to keep things from drying out. Although tougher cuts of beef, pork and lamb — think shanks, shoulder and ribs — are often the focus of braised dishes, you can also braise beans, vegetables and even fruit, which require a far shorter cooking time. A few hours in the oven gives the connective tissues in cheaper cuts of meat a chance to break down, making it fork-tender and far more flavourful than most quick-cooking cuts. Although most slow cooker fans love being able to toss everything in and turn the unit on, typically, braised meats are quickly browned first.

Because the Maillard reaction (browning) can’t occur in the presence of liquid — it requires a higher temperature — lamb shanks, short ribs, pork shoulder and beef chuck are ideally browned in a hot pan before the liquid is added. One of my most used pans is an enamel-coated cast iron braiser — a wide, shallow pan that’s almost a skillet, with a tight-fitting lid the same depth as the bottom. You don’t need a special braising pan, though if you have something that can go from stovetop to oven, you can take advantage of all those flavourful browned bits in the bottom of the pan. After browning, adding liquid (stock, tomatoes, beer and wine are common, but the process is well-suited to experimentation) will loosen those browned bits —and though recipes may specify a quantity, aim for the liquid to come about halfway up the side of the meat. (This ensures it won’t cook off entirely, but will produce a more concentrated sauce at the end.) Meat will toughen before it softens — if it’s not tender enough to pull apart with a fork, return it to the oven until it is.

Vegetables require far less time, of course — if you have multiple elements combined in one dish, like a pot roast you want to cook along with carrots and potatoes, let the meat braise for a couple of hours first before adding vegetables for the last half hour or so, to prevent them from getting too soft.

Braised leeks is a classic French dish, as is simmered beans — and the two happen to go very well together. Soak and simmer dry beans ahead of time, if you like, or start with a well-drained can of white kidney or navy beans.

Preheat the oven to 400˚F. Trim the root and dark-green ends from the leeks and cut in half lengthwise. Set a large, heavy skillet over medium-high heat, add a drizzle of oil and place the leeks cut-side up in the skillet. Cook for a minute or two, until golden on the bottom, then add the butter to the pan and turn them over so that they’re lying cut side down in a single layer. Season with salt and pepper.

Spread the beans over the leeks, pull the leaves off the thyme sprigs and sprinkle them over top, and pour over the cream. Bake for 20 minutes, until the leeks are very tender. Sprinkle with Parmesan and return to the oven for another 5 minutes, until bubbly and golden. Serves 4-6. 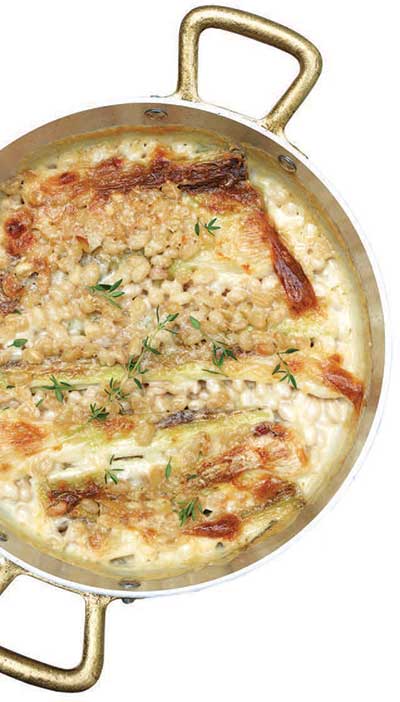 Pork shoulder is often braised in stock, tomatoes or beer, but it’s divine cooked in caramel, with coconut water, fish sauce and aromatics like shallots, chilies and garlic. Serve it with steamed rice, topped with green onions.

In a medium saucepan set over medium-high heat, cook the sugar with about 2 Tbsp water, swirling the pan often, until it turns the colour of maple syrup. Remove from heat and stir in the fish sauce. If the caramel solidifies, keep stirring until it melts again.

Preheat the oven to 300°F. Drizzle some oil into a large Dutch oven set over medium-high heat, season the pork with salt and pepper and brown the meat on all sides. Transfer to a plate and add the shallots, garlic and chilies to the pot; cook for a minute or two. Return the pork to the pot, add the caramel and enough coconut water to go about halfway up the side of the meat. Cover and cook for 3 hours, or until very tender.

Remove the lid, turn the heat up to 400˚F and cook for another 20 minutes, or until the exposed tops of the pieces turn golden. Serve with steamed rice.
Serves 6. 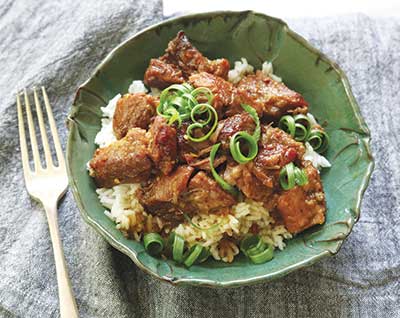 Red cabbage cooks down to a sweetsavoury- tangy side that keeps well in the fridge, can be served warm, at room temperature or cold, and goes well with all kinds of roasted meats, from turkey to pork.

Preheat the oven to 325˚F. Melt the butter in an ovenproof pot or Dutch oven set over medium heat. When the foaming subsides, add the remaining ingredients and cook until warmed through, then cover and braise for 1-1/2 to 2 hours, until the cabbage has cooked down and the liquid has thickened a bit. Taste and add a little more honey and/or vinegar as you like, to suit your taste (or a splash of apple juice or water if it needs a bit more liquid), and bake a little longer or simmer on the stovetop with the lid off, if you want to cook it down a bit.

Serve immediately or cool and refrigerate until you’re ready to rewarm it on the stovetop or in the microwave — the flavour will improve after a day or two in the fridge. Serves 6-8. 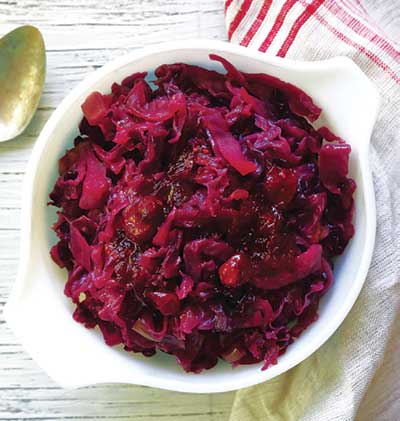 Beef short ribs are almost square, with flat bones — the meat will shrink as it cooks, but will wind up meltingly tender.

Preheat the oven to 300˚F. Heat a drizzle of oil in a heavy ovenproof pot or Dutch oven set over medium-high heat. Season the ribs with salt and pepper and brown on all sides, transferring them to a plate. Add the carrot and garlic to the pan and cook for a few minutes. Add the balsamic vinegar and cook for a minute, scraping up the browned bits from the bottom of the pan.

Return the browned ribs to the pan, add enough stock to come about halfway up the sides of the ribs. Cover and braise for 2 hours. Add the lentils, and a little more stock, if needed, so there’s enough to generously cover them. Cover and return to the oven for another 30 minutes, or until the lentils are tender and the meat is very tender. Serves 4-6. 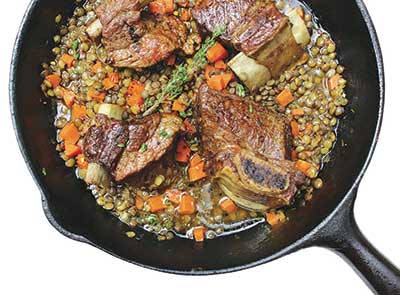 Shanks are best when braised, and are ideal for feeding a group — it requires the same amount of time to braise one shank as to braise ten, so you can put as many as you have people to feed into the oven and forget it for a few hours. Plan for mashed potatoes or polenta to catch all the saucy drips.

Preheat the oven to 300°F. Season the lamb shanks with salt and pepper. Heat a drizzle of oil in an ovenproof pot or Dutch oven set over medium-high heat and brown the lamb on all sides, working in batches if you need to so you don’t crowd the pan.

Transfer to a plate and sauté the onion, carrots and garlic for a few minutes, until softened. Return the lamb shanks to the pan, add the wine, stock, tomato paste, rosemary and bay leaf — the liquid should come about halfway up the sides of the meat. Cover and braise for 3 hours, or until the meat is very tender. Skim any excess fat from the surface and, if you like, remove the shanks and reduce the cooking liquid on the stovetop until it thickens to your liking — you could even purée it with a hand-held blender, if that appeals. Serve the shanks and sauce with mashed potatoes or polenta to catch the sauce. Serves 4-6. 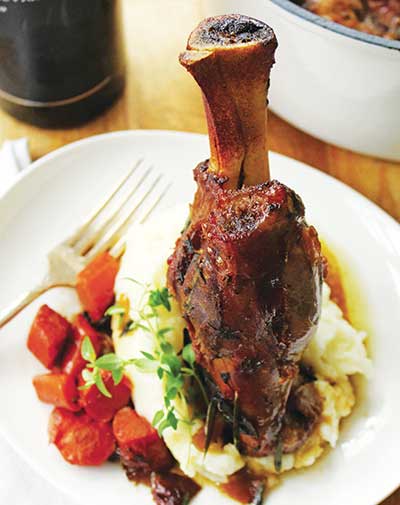