Cooks have been cooking with wine since there was wine to cook with. It can be, or do, everything in the kitchen; a poaching or deglazing liquid, or a braising medium, or serving as the cook’s cocktail. An open bottle on the countertop can ease the burden of the cook while making an almost instant pan sauce or rich gravy, infusing food with flavour as it steams, marinates and macerates. Adding a splash to your pan and your glass makes you feel like you’re actually cooking.

Besides the fact that food cooked with wine will make it taste deliciously like wine, it also adds sweetness and acidity (both essential for a well-balanced dish). It also contributes a bit of booze – it’s a myth that all the alcohol cooks off in the oven or on the stovetop, although most will evaporate when it’s splashed in a hot pan orsimmers for several hours in the oven. Some recommend freezing leftover wine (is that a thing?) in ice cube trays (are they still things?) to store in Ziploc bags to pop into soups, gravies and pan sauces.

You could certainly do this; or freeze wine flat in the same resealable bags so you can either snap off a piece or thaw the whole bagful and add it all. If you have fresh herbs you know won’t last, consider tossing them into the bag to infuse the wine as it lies in wait. I’ve been known to freeze leftover red with orange peels and a cinnamon stick for sangria, or to cook down into mulled wine syrup later. Sparkling wine or rosé that has lost its sparkle will, like other wines, last in the fridge about a week and can also be frozen and recycled for use in any dish that wine suits.

It’s a common school of thought that you shouldn’t cook with wine you wouldn’t drink straight. I’m on the fence about this, hesitant to pour a good bottle over lamb shanks, and convinced you lose much of a wine’s nuances once it’s been simmered for hours with meat, onions, garlic, rosemary and salt. I tend to go for cheap (but still tasty) bottles for cooking, and keep the good stuff for sipping at the stove.

When choosing a bottle for your pot, some chefs advise that you select a variety from the same region where the dish you’re cooking or ingredients you’re using
originated. Dry white wine tends to be better with seafood, and big, bold reds, even sweet ones, can stand up to hearty stews and meaty braises. Go for even
bolder fortified wines like port and sherry in smaller doses – they tend to do well with (and in) desserts, and you know whatever you’ve used in the dish will pair
well served in small glasses alongside.

Mussels with Garlic and Wine

Fresh mussels are surprisingly fast and easy to cook, and a great reason to crack open a dry white wine to then finish with dinner. All you need is a good loaf of crusty bread to mop up the winey, garlicky, creamy juices.

In a large, heavy saucepan, heat the oil and butter over medium-high heat. Add the garlic and cook for a minute. Add the juice of half a lemon, the mussels and the white wine and cook for a minute, to reduce the liquid; add the cream, cover and simmer until the mussels are opened, which will take about 5 minutes. Discard any that don’t open. Divide between two wide, shallow bowls; scatter with chopped parsley and serve with crusty bread or freshly cooked fries.
Serves 2. 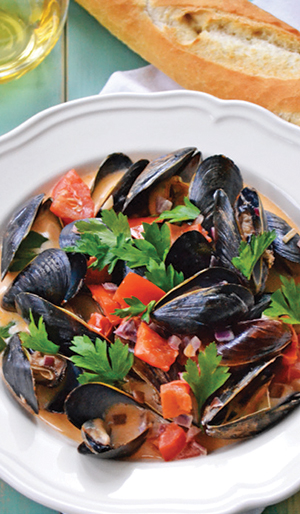 Everyone is familiar with beef bourguignon; coq au vin may be familiar, but not part of most Canadians’ at-home recipe repertoire. It’s a similar process, the chicken pieces taking less time to braise than stewing beef, and worth the effort even on a regular weekday.

Preheat the oven to 350°F. In a large, heavy skillet, cook the bacon over medium-high heat until the fat has rendered and the bacon is crisp. Remove with a slotted spoon and set aside in a casserole dish. Meanwhile, season the chicken pieces with salt and pepper. Brown them in batches in the skillet, in the bacon drippings, turning until browned on all sides. Transfer to the baking dish with the bacon as they brown.

Pour off all but about a tablespoon of the fat from the skillet, reserving it, and sauté the onion, carrot and garlic in the skillet for 3-4 minutes, until soft and turning golden. Shake the flour over the veggies and stir to coat, then transfer to the baking dish with the chicken.

Pour the chicken stock into the skillet and stir to loosen any browned bits. Pour the stock and wine over the chicken, and top with parsley and thyme. Cover and bake for 30 minutes.

Just before the chicken is finished cooking, heat a drizzle of the reserved drippings in the same skillet and sauté the mushrooms until they turn golden. Remove the chicken from the oven and carefully pour most of the juices off into the skillet with the mushrooms. Return the chicken to the oven, uncovered, for 20 minutes.

Bring the juices to a simmer, turn the heat to low and cook, stirring often, until the sauce has reduced. Pour over the chicken and serve.
Serves 6-8. 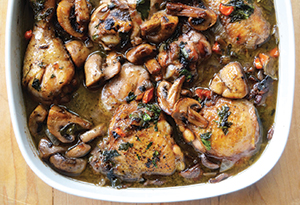 Preheat the oven to 350°F.
In a medium saucepan, melt the butter and chocolate with the red wine over medium-high heat, stirring until smooth. Remove from the heat and stir in the brown sugar and salt until no lumps remain. Let sit for a few minutes to cool slightly, then stir in the eggs one at a time. Stir in the cocoa and flour just until the mixture is combined. Spread into a parchment-lined 8×8- or 9×9-inch pan and bake for 25-30 minutes, or until the brownies are dry and cracked on top and the edges are beginning to pull away from the sides of the pan. Serve warm. 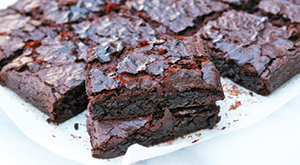 Yes, you can make your own wine jellies that actually taste of wine and aren’t as hard on your teeth as what you find in a store! Rosé has good colour and flavour, but the recipe works with white or red, too – a great way to use up the last cup in a bottle, or some prosecco that has gone flat.

In a medium saucepan, stir together the rosé and sugar and sprinkle the gelatin over top; let stand for a few minutes to soften. Set over medium high heat and bring to a simmer, stirring until the sugar and gelatin have dissolved. Stir in a drop of food colouring if it’s not quite pink enough.
Pour into a loaf pan (or small silicone candy moulds, if you have them) and refrigerate until firm. Cut into small 1/2-inch cubes and roll in a shallow dish of sugar to coat.
Makes about 100 jellies. 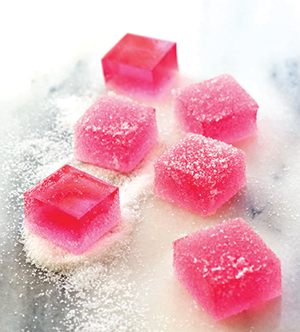 My friend Dana introduced me to bright burgundy mulled wine milkshakes; hers came about after the last of a batch of mulled wine cooked down until it was thick and syrupy, and she added the cold bit at the bottom of the pot to vanilla ice cream in a blender. Now she makes it on purpose – it’s a great way to use up leftover wine, and the syrup would be as delicious poured over ice cream, fruit or cake.

Combine the red wine, sugar, orange juice, cloves, allspice and cinnamon in a small saucepan. Bring to a boil and cook over medium-high heat for 30-45 minutes, or until reduced to about 3/4 c. Pour the mixture through a sieve to strain out the spices and cool completely, then refrigerate until cold.
Blend ice cream, milk and syrup to taste in a blender until it’s the milkshake consistency you like. Dana recommended 1/2 c. ice cream, 1/4 c. milk and 1/4 c. wine syrup, but I found that a little runny for my taste, and, in fact, after a couple of tries, just ditched the milk completely!
Makes 3/4 c. of wine syrup,