CALVADOS: FROM THE HUMBLE APPLE TO LIQUID GOLD 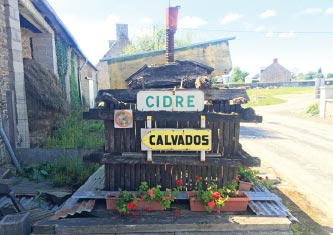 The French have a long history of making the best of what nature has to offer. As is the case with most cultures in the world – North America’s being a glaring exception – very little food is wasted in France. I’ve dined on pig’s ears, blood sausage and cow face during my trips to France, and all I can say is, the French can make anything taste good. Some of my most memorable meals in France were found in the Normandy region; its rich culinary heri-tage has contributed treasures that include cheese (Camembert, Pont l’Évêque, Brillat-Savarin), brioche, salad cauchoise (a tasty combo of spuds, celery, ham and walnuts), slowly simmered rabbit with morels and some of the best oysters in the world. There’s one key element missing from this list, however, and that’s wine. In France, wine is food, but the Normans must be content with getting it from the rest of the country, as their cool maritime climate is not grape-friendly. As such, the beverage of choice in Normandy is cider, and the brandy distilled from cider, known as Calvados.

Apple orchards pepper the landscape in Normandy and the cultivars are legion. There’s evidence to suggest that some form of Calvados has existed since the 8th century, but the first documented production took place in 1554, by Lord Gilles de Gouberville (the apples he cultivated are now known as Goubervillean varietals). He discovered that many of the 40-plus varietals he’d created were unsuitable as table fruit, but were ideal for cider, and today there are more than 200 varieties of cider apples grown throughout Normandy. The varietals tend to fall into one of four basic flavour categories: bitter, sweet, bittersweet and acidic. In 1942, the Calvados region was given official appellation (AOC) status, and the boundaries and rules have been revised twice since then, in 1984 and again in 1996. The key appella-tions that form the AOC include Calvados, Orne and Manche, and, of these, the sub-appellation of Pays d’Auge – situated within Calvados – is thought to yield the finest examples of the spirit.

The production of Calvados is fairly simple; the apples are pressed, and the resulting juice is fermented into a dry cider. Most producers encourage a long, slow fermentation over several months, as this process helps ensure stability and concentration of flavour. From there, it undergoes either a single (in a column still) or double (in an alembic pot still) distillation. The rules for Pays d’Auge stipulate a double alembic distillation along with a minimum of two-year ageing in oak barrels, although the finest examples are typically aged much longer, sometimes up to 30 years (or more) for the rarest examples. On occasion, you’ll find the term “fermier” on Calvados labels, and this means that the spirit is both grown and produced on a single farm. There’s also an AOC for Calvados, produced from a combinationof pears and apples, known as Calvados Domfrontais, and some of them can be excellent, albeit rarely found outside the region.Young Calvados delivers an intense apple flavour, making it ideal for cooking.It works equally well with sweet dishes (I like to add a splash to tarte tatin, for example) or savoury, so I like to keep an inexpensive version on hand for cooking, and a premium example for sipping.