Move over microbrew beer, there’s a new craft in town. It’s just as sudsy and refreshing, but a little more fruity. Canadian-made craft cider is the latest craze to sweep the country’s libation scene and is currently showing no signs of slowing down.

Trendy or not, cider is not new to this world by any stretch of the imagination. Not as ancient as beer – as its most primitive production happened approximately 7,000 years ago – cider production still dates back an impressive 2,100 years or so and, not surprisingly, its creation is credited to the English.

Time travel back to present day and you’re hard-pressed to find a country that doesn’t put its own spin on the fermented fruit beverage. Much like how terroir plays an essential part in wine production in different areas of Canada such as the Okanagan, Niagara and Nova Scotia’s Annapolis Valley, growers in different parts of the country rely on the fruits of their orchards to produce unique and quality ciders.

(Calgary, AB)
Though cider maker Brodie Thomas and his co-owners, Andrew Duncan and Tim Houghton, don’t press and ferment their ciders using completely Alberta-grown apples, they are still Alberta’s first craft cidery. Using a mix of B.C. grown apples and some unique ingredients like locally grown hops or haskap berries, Uncommon is able to churn out high quality small-batch ciders. The cidery does not have a space that’s open to the public yet, but is currently in the process of building a tasting room in Calgary’s Barley Belt set to open late summer 2018.

Try the Uncommon Apple Haskap Cider – apples have been fermented with the robust haskap berry to offer a finished product that is off-dry and well-rounded. uncommoncider.com 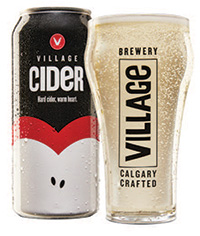 (Calgary, AB)
Since being debuted in May, Village’s first apple-y offering has been embraced by local establishments and cider fans alike. It’s unclear whether the celebrated brewer is going to delve deeper into the world of cider production, but for the summer anyway, this off-dry apple cider infused with a touch of Earl Grey tea is an easy drink to enjoy in the sunshine. villagebrewery.com

(Calgary, AB)
Since being debuted in May, Village’s first apple-y offering has been embraced by local establishments and cider fans alike. It’s unclear whether the celebrated brewer is going to delve deeper into the world of cider production, but for the summer anyway, this off-dry apple cider infused with a touch of Earl Grey tea is an easy drink to enjoy in the sunshine. villagebrewery.com

(Kelowna, BC)
This small-batch cider producer in the Okanagan makes for a charming visit if you find yourself in the valley this summer. Barring that, it’s hard not to be charmed by its especially striking bottle designs that depict summer scenes with a little Dr. Seuss-esque flair. Though it only started producing in 2016, all of Scenic Road’s cider is produced using heirloom apples as trees in the surrounding orchard have been growing fruit for over one hundred years.
Try the Scenic Road Razz – a mix of Okanagan-grown apples and Fraser Valley raspberries ferment together for months resulting in a ruby red cider that’s off-dry thanks to the sweet, sun-kissed berries. scenicroadcider.com

(Victoria, BC)
Now in its eleventh year of business, Sea Cider has seen a massive amount of success in Western Canada and parts of the United States due to a combination of organically grown fruit and a natural fermentation process. The cidery itself boasts a gorgeous patio and beautiful surroundings. It is here that you can sit, sip and discover the cider roster that ranges from an uber-dry German style to the funky, slightly sweet “Birds and the Bees,” which incorporates lemon bitters and honey into the fermented apple mix.

Try the Sea Cider Rumrunner – for a cider that packs a punch, try this unique concoction that sees cider aged in bourbon barrels for six months. Perhaps not perfect for a casual patio sip, this complex cider deserves your full attention. seacider.ca

(Kelowna, BC)
This clever offshoot of BC Tree Fruits Ltd. (the province’s fruit producer cooperative) offers three types of cider that are all produced using imperfect stone fruit. Different types of apples, peaches and pears that are deemed undesirable by grocers wind up being pressed and fermented at their impressive cidery and tasting room just outside of Kelowna’s downtown core. Try the Broken Ladder Apples and Hops – seeing a cider in a tall can doesn’t always scream “quality,” but don’t be fooled. This hop-infused apple cider is dry and slightly floral and one of the best hopped varieties you’ll find in the province. bctreefruitscider.com

Dan Clapson is the co-founder of Eat North and The Globe and Mail restaurant critic for the Canadian Prairies. Find him at eatnorth.com and @dansgoodside.