As I sit in the office of Trialto, the wine importer that represents Catena’s wines in western Canada, during a video conference call with Laura Catena, the managing director of Argentina’s most famous winery, I’m struck by how calm she seems. This strikes me as odd because her life redefines the notion of what most of us consider a busy life. Her time is split between San Francisco (where she lives) and Mendoza, Argentina, but in addition to running Catena, she’s also an M.D. in the emergency ward of one of San Francisco’s busiest hospitals. Her book, Vino Argentino: An Insider’s Guide to the Wine and Wine Country of Argentina, is a defining text on the country’s wines. In addition, she’s the mother of three children.

I ask her how she manages all these jobs and she says the key is that sometimes, even when you strive for an A-plus, you have to settle for a B. Let that be a lesson to all you slackers out there.

Her father, Nicolás Catena Zapata, is largely responsible for putting Argentine wines on the world map and he’s been awarded pretty much every major accolade a winemaker can receive. The winery was founded in 1902, but it was Nicolás who took it to a new level, and in doing so, he brought a lot of attention to the country’s wine industry as a whole. In one respect, Argentina was in the right place at the right time; when people began to tire of Aussie shiraz, Argentine malbec was a logical transition because, like shiraz, it offers lots of immediate pleasure in a fruit-forward style. If anything, malbec’s a little more restrained than shiraz, and the style has served the country well as it continues to enjoy healthy sales.

Catena’s vineyards are planted at altitudes rarely seen in the wine world. The flagship Adrianna’s vineyard sits at almost 5,000 feet of elevation. Picture Sunshine Meadows in Banff but covered in vines and you get the idea. Because of the extreme altitude, many thought that the elevation was simply too high to get fruit to ripen, but that was obviously not the case. As such, Catena’s vineyard has become one of the most studied vineyards in the world. Nicolás Catena describes the vineyard like this: It was planted with cabernet sauvignon and chardonnay cuttings from France, and with malbec taken from Lot 18 of his 75-year-old Angélica vineyard. Over the next few years, the wines consistently proved to have more minerality and more acidity than wines from other sites in the Southern Uco Valley at lower altitudes – sites such as Altamira, La Consulta and Eugenio Bustos. The Adrianna cabernet had more pyrazines – the molecules that give the variety its characteristic capsicum (bell pepper) flavour. The malbecs had more “grip” and denser tannins, and the chardonnays were both mineraly and “fat.”

As a grape, malbec was once a staple in Bordeaux, but it was effectively kicked out because it ripens late and is susceptible to mould and other problems in the region’s cool, often wet, maritime climate. In the dry climes of Argentina, however, it has thrived and while it defines Argentine viticulture, the country – and Catena in particular – is now producing some excellent chardonnays and cabernets. This is important because very few wine regions can survive as one-trick ponies and consumers are increasingly expanding their wine horizons. Nevertheless, the country’s beloved malbec still reigns supreme, and you can encounter many distinctive styles, depending on region and producer. Catena has demonstrated this, perhaps better than anyone, with the release of some pricy single vineyard wines that push malbec into unfamiliar territory – complex and highly expressive wines created to demonstrate the individuality of the sites.

For those interested in the premium range, there are several options. The White Bones chardonnay ($131) is made from a few rows within a single block of the Adrianna vineyard. It’s aged in French oak and bears more than a passing resemblance to Grand Cru Burgundy, a rich, complex wine with lots of racy minerality. The White Stones chardonnay ($110, but sold out until next year) also hails from the Adrianna vineyard, but from a different block, with much more gravelly soils. Like the White Bones, it’s very expressive and Burgundian in style. I would say that these two whites are easily among the best chardonnays produced in the new world.

In the premium malbec range, things get serious when you move from the basic malbec (at about $20 a bottle) to the 2012 Nicasia malbec ($102), from the southerly growing region of Altamira en La Consulta. Near the top of the range is the iconic Nicolás Catena Zapata ($132), a wine that was the flagship for many years before the release of some of the new single-block wines. This one’s a big, brooding style of malbec that needs time to unveil its numerous charms. Finally, there’s the River Stones malbec ($154), sourced from a single plot in the Adrianna vineyard. When I tasted this during my virtual interview with Laura Catena, it struck me as a new benchmark and expression of this grape, more like a top-growth Bordeaux with amazing complexity and finesse. People who tend to collect old world wines in the $100-plus range should seriously consider these – they are quite remarkable.

For everyday consumption the entry-level malbec and chardonnay are always among the best value wines on the market and deliver well beyond their $20
price points. Move up to the mid-tier Alta range and you get into some serious drinking for about $50 a bottle (these are also age-worthy). Catena is one of the
most dynamic wineries in the world and well worth a visit should you be planning a visit to Argentina. It’s a remarkable place producing remarkable wines.
Cheers! 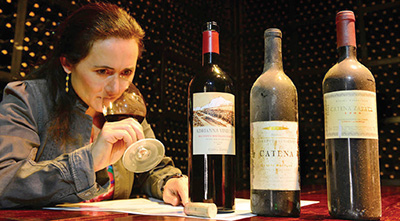 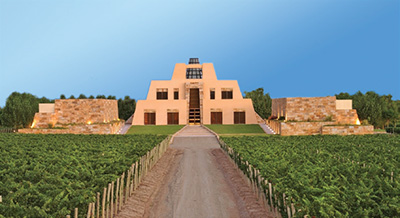 Geoff Last is a long-time Calgary wine merchant, writer and broadcaster and a regular contributor to the Calgary Herald, City Palate and other publications. He instructs on food and wine at the Cookbook Co. Cooks and was recently awarded a fellowship to the Symposium of Professional Wine Writers, based in the Napa Valley. He manages Bin 905.